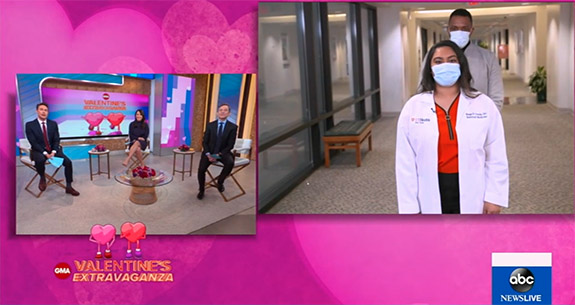 Vemula believed that she was being interviewed about the challenges of essential workers during the COVID-19 pandemic. What Vemula didn’t realize was that her boyfriend of six years was standing directly behind her in the hospital corridor while she answered the anchor’s questions. 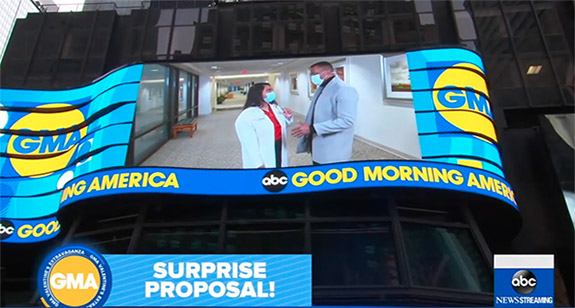 Vemula and Bean are both medical residents, but are serving in hospitals nearly two hours apart. He works for UT Southwestern Medical Center in Dallas and Vemula works at the University of Texas Health Science Center in Tyler.

“She was amazing and beautiful and then, finally, I worked up the courage to talk to her,” Bean explained in the lead-up to the segment. “She is literally the most pure-hearted person I’ve met in my life. I literally think she’s an angel.”

Bean had purchased a round diamond solitaire engagement ring back in October, but couldn’t find the right time to pop the question due to their grueling schedules.

When asked by Johnson what it’s been like to be on the front lines during a pandemic, Vemula told him that it was scary coming in as an intern fresh out of medical school.

“We didn’t want to have you on GMA without having a big surprise for you, as well,” Johnson added. “As much as we were trying to concentrate on what you were saying, turn around for a moment. Take a look behind you.”

Vemula nearly jumped off the ground when she recognized that it was her boyfriend. Then she gave him a big hug.

“Steven, I know you’ve got something to say here,” Johnson said, queuing up Bean’s big moment. “Why don’t you take it away.”

“So Raaga, one of the things I love about you the most is that you’re so selfless,” he began. “You’re always putting into consideration others before yourself, so I thought, ‘I want to especially consider what you like,’ and I know you love surprises…”

Bean told Vemula that he loves her and he thinks she is beautiful.

“I followed you to med school in a completely different state and I’ll follow you anywhere to be by your side,” he continued, “so with that being said, I do have a question for you…”

At that moment, he opened a white ring box, and went down on bended knee.

Vemula shrieked, “Oh, my God,” when she saw the ring for the first time.

“Would you marry me?” asked Bean.

“Yes,” Vemula responded. He placed the ring on her finger, and they embraced. 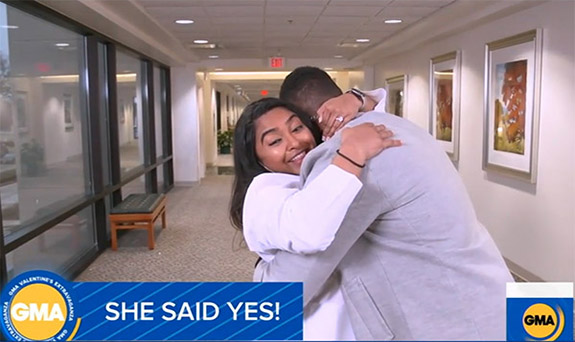 Back in the GMA studio, the hosts celebrated by popping mini confetti cannons. 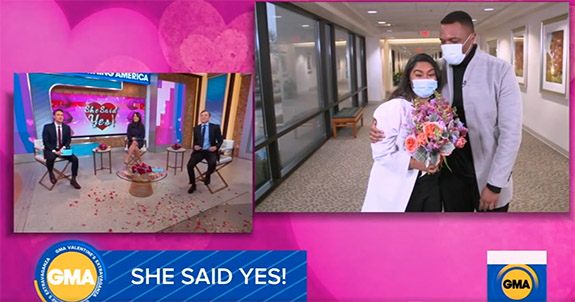 In addition to the thrill of sharing their love story on national television, the couple learned The Knot had given them $5,000 to spend on their big day.